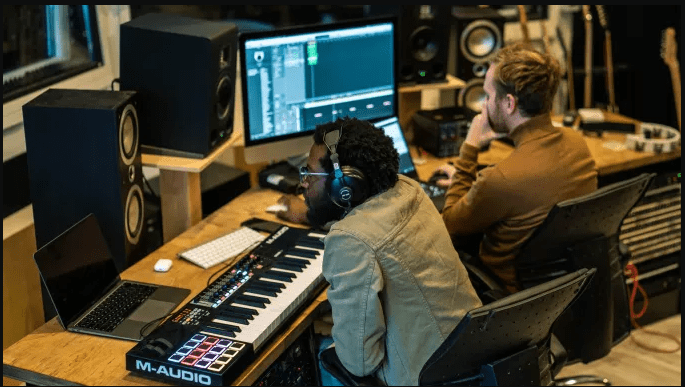 Horace Wangnin Saizonou aka Horace Tempo is a known music producer who has teamed up with Mentorship for Artists such as Kubla Khan and Shelley Segal in order to create hit songs. He is a rising music producer who produces instrumental tracks to create a unique identity in the music industry. His foray into music has been felt in the top music industries of Nigeria, Ghana and South Africa, even though he is from the Benin Republic.

Recently, he shares his thoughts on a number of questions, to show how far he has come in the music world and what he has in store for his growing social media community and listeners.

On what informed his name “Horace Tempo”: “Tempo in music means the speed or pace of a given piece, and it is measured by beats per minute. Horace is my first name. So, for my stage name, I chose Horace Tempo. I am addicted to the consumption of music. That has led me to study the art and start producing. I am a big fan of the game too.”

Horace Tempo has a personality that is shrouded in mystery. He is a book with unending chapters of intrigues and surprises. His music is so diversified that you cannot put a lead on him or his music. When asked how he would describe life given his inclination as a musician and mentorship for artists, he was all mysterious yet.

“Life for me is too simple to be understood. If you can leave yourself all to God and trust God, you should be on cruise control and living happy. If that’s not the case, then you should keep simplifying your meaning of God till you feel like everything that you do or happens in your life is out of your control,” he said.

Horace Tempo hasn’t exactly been an open book musically. His musical identity is not localized, it is a broader spectrum of Pan-Africanism in outlook and sensibility. So, when asked for his advice on what genre an artist should stick to, his answer exposes his own true nature of Mentor for Artists.

“Usually, the energy that artists bring into a session is what translates into the beat, lyrics and genre or sound produced after the session. So, as a producer, I’ll say you should not stop acquiring knowledge about the key instruments and sounds of all genres, you have to master at least mixing one genre, and then that will enable you to become commercial and get decent gigs,” he said.

Before launching out as an independent artist, Horace Tempo was basically producing beats or instrumental and that informed the creation of his first musical effort titled “The Ride”, a powerful instrumental which gave him an ample introduction to the music world.

After “The Ride”, Horace Tempo released two other instrumentals in quick succession, namely; “Logic” and “Focus”. His musical coast got enlarged when he dropped “Self”, another instrumental. With “Self” he launched himself as an independent artist. Thereafter, he has gone to do the songs of all his instrumentals, joining forces with other mentorship for artists along the way.

Horace Tempo, who was born Horace Wangnin Saizonou, is a rising best ghost producer who usually creates instrumental tracks to establish an identity unique to the world of music. Tempo recently released a brand-new track titled Self featuring Kubla Kahn and Shelley Segal. Tempo can also be a coach in the company he founded. Horace Tempo is a young musician who has been producing music for some time in the past with tempo music production house. While he’s been making music and working hard to create a distinctive and distinctive sound that can assist him in the pursuit of his eventual fame.

With hundreds of thousands of streams on Spotify and amassing a huge fan base through Instagram, Horace Tempo is certainly a force to be considered in the world of music. Because of his achievements to date, he’s been recognized as an emerging star in the world of music and it’s impossible to predict how much his popularity and fame take him as a best mentorship for artists.

His first effort in music “Self” was greeted with admirable success, despite the humble beginning. He’s been able to continue to paddle his canoe with ease, creating the right connections and drawing inspiration from the music source of his many mentorships for artist.

“What motivates me is to remind myself that if for an initial step I can launch “Self” in the form of an artist who has independent tempo music production house, I am on been given a call and I’m not just enthusiastic, I am the one chosen. One of the biggest challenges for me is keeping listeners on the hook while you’re making food. If you are an independent artist (or “up and coming”, you must first gain followers before building a fan base and that’s not an easy task. If you know the business and know what you are doing, you will already know radio is your method of reaching the people who listen to you.” The singer declares.

Yes, my track “SELF” has gained over 700 million streams in one year for the best sound producer. It is an uplifting and powerful song that was written and recorded by me, in the month of May. I’ve already recorded an original and released it to the black empowerment track “Upheaval” of the legend of Benin, Nel Oliver. I’ve been blessed with opportunities to network with other creative, and the collaborations that are in my pipeline are blessings upon blessings. They’ll put food on the table for me, my family, and my followers. Horace Tempo music production house refer to my fans as my business plan is to eventually incorporate sales and NFTs into every customer to reap rewards each time they contribute to the growth of The T E O M O brand through sharing their songs,” he adds.

The music as best sound producer he performs is from Nigeria, Ghana, and South Africa. He is a pan-African mix of musical genres. His ambition is to elevate African music to new levels.

How do you achieve your goals when you’ve lost your motivation?

A Precise Guideline About Sports Art

How to Choose the Right Signs Aberdeen Company...